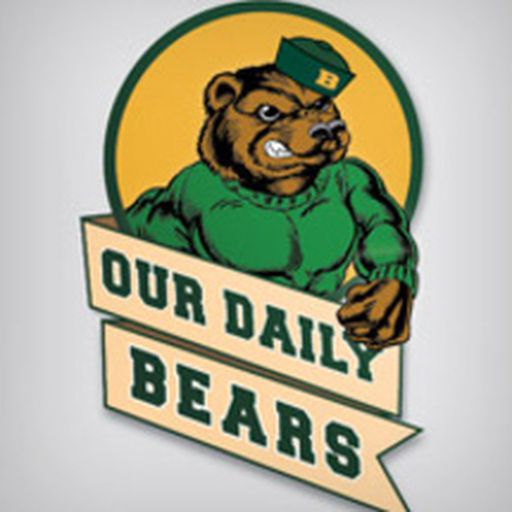 I had no problem with the call

I had more of a problem with punting from their 36 earlier in the game than I did in this particular situation… but I kind of understood even that punt given the down and distance.

But yeah. No issues here with going for it in the 4th quarter. I can see the field position argument for punting it, because what we ended up with was kind of a worst case-worst case in terms of field position (though not true worst case, since that would be an Oklahoma State score)… worst case of not converting, then "worst case" of being pinned down within the 10. But honestly, I don’t have any cause to quibble. Sometimes you make it, sometimes you don’t. That decision was not a microcosm of the rest of the game.

The play that was actually used and the one before that? Now that’s a discussion we can have. But that’s entirely separate from the decision of whether or not to go for it.

commented on Why I Like Baylor To Beat Oklahoma State In Stillwater from Our Daily Bears, Oct 1, 2021, 10:54am EDT

B12's comment on Why I Like Baylor To Beat Oklahoma State In Stillwater from Our Daily Bears,

Travis_Roeder's comment on Why I Like Baylor To Beat Oklahoma State In Stillwater from Our Daily Bears,

PODCAST!! The States of Iowa and Oklahoma

FIRST: Not sure. Good question.
SECOND: I’ll say Spencer Sanders’ mobility. I know he’s been very hit-or-miss, but I’m concerned about his mobility and the issues we’ve demonstrated with containment.
THIRD: I think it happens. Iowa State’s defensive line is the best in the conference. OkSt is led by their defense (super weird thing to write), but they’re not on the disruptive level of Iowa State. Also, there were execution errors that played into the second half as well.
FOURTH: FOR-ev-VER.
FIFTH: I could be wrong, but I think we’re gonna wear white.

Atta'Bear's comment on Thoughts on the McLane Stadium Experience and Gold Out from Our Daily Bears,

Co-Players of the Week?

PoppyBear's comment on The Afternoon After—Wrapping Up Iowa State and Week 4 from Our Daily Bears,

Your_Bailey_Bear's comment on The Afternoon After—Wrapping Up Iowa State and Week 4 from Our Daily Bears,

Music may be one of the spots where our fan base is the most divided when it comes to in-stadium stuff. Having interacted with Josie and then Derek after her, I’m cognizant of the pressures that the music person has. Like I said in the post, it’s one of the most thankless jobs on Game Day. There are multiple avenues of pressure being applied, from fans who are dissatisfied (on both ends of the spectrum), the administration, and then there’s the simple logistics of the thing. Take, for example, the 4th quarter. It was an intense moment and a timeout (I think?) was called. They played the first note of Jump Around and then stopped… because the TV went to commercial and there was some pre-programmed advertisement. Once that finished, they kicked off the Jump Around again and got it going.

I also recognize that sponsors frequently pay for certain promotions that occur during commercial breaks and so they’re bound by those confines as well. All of that said, I’m personally inclined to cut the music person a good bit of slack. If the new person is anything like the previous two, they’re trying their dead level best to keep the energy in the building while operating under the restrictions and mandates handed down plus the pressures brought to bear by unhappy fans.

commented on Thoughts on the McLane Stadium Experience and Gold Out from Our Daily Bears, Sep 27, 2021, 10:01am EDT

When McLane is rocking and rolling, that chant is LOUD. Why are we not doing it? It’s been several years.

commented on Thoughts on the McLane Stadium Experience and Gold Out from Our Daily Bears, Sep 27, 2021, 9:51am EDT

Yeah, I dislike that chant too. Especially the timing of it in this game.

commented on Thoughts on the McLane Stadium Experience and Gold Out from Our Daily Bears, Sep 27, 2021, 9:50am EDT

Re: Baylor Line – I’m pretty sure in years past they let upperclassmen fill in those empty seats a lot quicker than 8 minutes through the first quarter. Not 100% on the timing there, but it definitely wasn’t happening on Saturday. Not a good look.

Berm – Ehhhhh, I dunno. I understand your perspective, but I would probably say I prefer letting Baylor fans have the opportunity to get into the game on the berm and run the risk of an increased number of visiting fans. At least the Visitor’s Sections aren’t smack dab in the middle of the north end zone, breaking up what should be loud and rowdy Baylor fans in the enclosed end zone. That end zone should be LOUD.

commented on Thoughts on the McLane Stadium Experience and Gold Out from Our Daily Bears, Sep 27, 2021, 9:49am EDT

Stadium Views: Thoughts on the McLane Stadium Experience and Gold Out