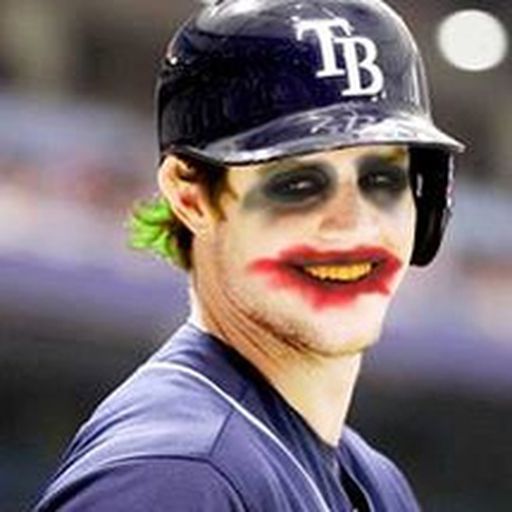 thedudeofdudes's comment on GDT: If the Rays go 3-3 they win 100 games from DRaysBay,

phillyraysfan89's comment on GDT: If the Rays go 3-3 they win 100 games from DRaysBay,

That movie has been on my list for a long time, Stepbrother

But I’m never "in the mood" to actually watch it. I’m sure it’s good, but it seems like an unnecessary root canal. Please talk me into watching it. Your opinion/thumbs up will make all the difference, Bestie.

Miami has crosswinds as well. Tampa Bay is drenched in humidity for 95% of the baseball season.

I hope you didn’t just spoil the surprise! The big reveal, the full circle of this thread … yes, it’s all there at the bottom. And it’s glorious.

$neaky $tu said he’s awfully sorry, and he told Agent Ute that he’ll be taking his nefarious plan back underground for awhile. Stay alert! All power to the people!

And now the true objective of our collaboration on this thread has been revealed!

Thank you, Agent Ute. Mission accomplished. You have been of great value to the Tampa Bay community, and you will be rewarded.

Did we just become best friends?

Stu should commit to matching every public dollar

County and city put in a total of $300 million, Stu throws in $300 million of HIS OWN MONEY, and the corporate/business community commits to $300 million worth of suites, boxes, naming rights, partnerships, sponsorships and ads. With some creative financing, it could work.

I believe they have intentionally suppressed the fans’ goodwill

while putting the best product on the field in order to make it clear that the fans aren’t and won’t ever support this MLB franchise. It also stokes Stu’s ego to win while gaming the old establishment’s system.

Don’t know the specifics about Al Lang. It’s just a theory that the Rays bought the Rowdies in order to have more leverage.

When did that happen?

The commissioner was here with 1,750 paying customers? What night was that, please?

He won’t commit any of his/the team’s real money no matter what. If he would just throw out a fucking number, say $300 million, it might get some wheels turning.

He expected more everything (especially public gratitude) for putting a competitive team together. Only problem was his nature is to deal with obstacles by going into attack mode. And he couldn’t keep his mouth shut, taking every opportunity to shit on the Tampa Bay Area for not kissing his feet.

That, and they basically shuttered their marketing department.

Is that an official statement?

The Glazers are not absentee owners. Three or four of the siblings live here primarily. They’ve done way more for the community than Stu has ever thought of from his home in the Hamptons. Has he invited you there yet? That’s a perk for only his best henchmen.

Pretty sure what he’s saying is

Veterans in Tampa Bay are cheapskates who don’t love baseball or the community enough to support Stu’s bottom line.

Again, why lie or misrepresent or exaggerate as you’ve done several times on this thread?

What does your pal Sternberg get from you dragging Jeff Vinik?

Trade Walls with Margot and a Rule V eligible prospect

The name of the game this winter needs to be quantity for quality / consolidation. Gotta turn the logjams into a couple of impact players.

You and I could be those vigilante fans

Of course, the shill would report us to the authorities …

But seriously, it wouldn’t be hard for a clever fan to smuggle in a thermos full of paint and a couple of balloons to throw at the stupid Montreal sign. Trade off is being banned for life, but that fan would be a hero.

I’d settle for a large banner protesting the whole dumb idea. Wonder what security would do.

I think what the shill is saying is that Stu thinks 40 spring training games in St. Pete is what he, Stu, thinks this community deserves. Hey, you still get to watch on TV, so shut up! Sure, they’ll engage in talks with Tampa/Hillsborough about a nice, open-air stadium in Ybor. I’m sure the monorail salesman will talk up the "personal air conditioning systems" available on some seats that fans can "subscribe" to. Maybe they can even resurrect the sail roof idea from days of yore. But ultimately, it’s all a mirage since his fallback plan is to refurbish Al Lang stadium, which he already owns.

It’s frightening to me that Stu might be able to privately finance an Al Lang overhaul if his Rays get their share of the Trop site redevelopment money. Maybe they work with the city to throw in some traffic flow improvements. It won’t cost anywhere near a half a billion. He could announce this plan after more bad-faith talks and negotiations at the end of the 2024 season along with plans to charge exorbitant prices for PSLs for the rest of their time in the Trop. How about an embarrassing empty Trop for the last year or two of the lease? I’d put nothing past him.

He bought plenty of the downtown Tampa land

Again, why misrepresent and exaggerate to make your point? Maybe it has something to do with your boss tasking you with replying to every post on this thread that’s not pro-Rays management. Shill