There's big money in wrestling, but the non-stop schedule leaves the participants with no time to heal. Often they have to work through pain or worse without an offseason, but pro wrestling won't embrace a seasonal format.

1. The most common symptom I've seen from post-concussion syndrome is vomiting. I once drove a pay-per-view headliner to appear on a live morning TV show the night after a 20-plus minute main event match in which he blacked out "at least once," per his estimate. He barfed in the rental car on the way to the studio. When you vomit from PCS it's not like a normal person; there's no frantic waving of hands to signal for a receptacle. You just gurgle it out onto yourself and into the floorboards, unannounced. It's as if the damage dealt is the brain's sudden inability to control the containment of consumed food, like a line of code has been deleted from an operating system.

(The upside that day: no one asks questions when a professional wrestler walks into a new place with his shirt off. Office building, bodega, funeral, doesn't matter.)

2. At the moment Daniel Bryan is out of commission for WWE, although not because of a concussion, just a really severe neck injury that required surgery. Bryan's injury dashed months of well-plotted, well-executed booking that built towards a championship at WrestleMania 30. Bryan should be WWE's flagship babyface right now, headlining TV and PPV events and working a grueling events schedule in hopes that he could one day at least complement John Cena as the company's stalwart marketing and public relations ambassador. Instead, they're scrambling. 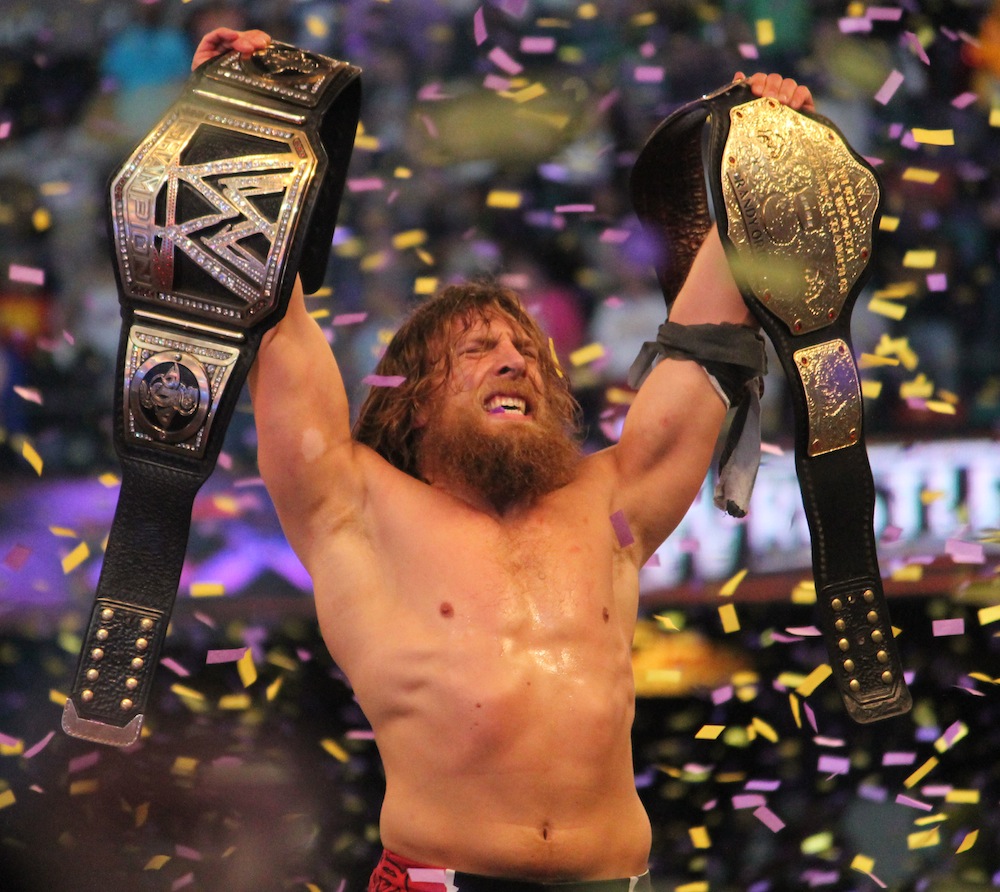 3. There's no real reason why live pro wrestling airs 52 weeks a year on TV, without reruns, or why companies like WWE or other wrestling companies tour year round. The shortest answer is that pro wrestling as an industry has no self-esteem when dealing with the entertainment business at large and will let television networks dictate terms based on antiquated (read: profitable) concepts. No sports league provides year-round seasons, because player unions exist to fight such exploitation. Pro wrestling doesn't (and never will) have a labor union. Other than daytime soaps (which contain almost no hurricanranas), no scripted television program will run year-round. In part because of production and talent costs, but also because of the inevitable creative malaise within such a concept.

4. You may have little respect for the genre of pro wrestling to begin with, but I promise you that if HBO forced 50 more episodes of "True Detective" this calendar year, the metaphysical exploration of Carcosa wouldn't last past Labor Day. Eventually Hart and Cohle would be dumping mud on a naked porn star to learn the real identity of the Gobbledy Gooker, too. No one in the industry enjoys working on a scripted program that never takes a week off. It sucks. When even late night talk shows can take a week off for say, New Year's Eve, there's poor old wrasslin'. trying to figure out what to throw against the wall and how in the world to promote it. If a network sees that the NBA Finals or Golden Globes are on the horizon, they hold back new episodes of original programming. That concept is foreign to pro wrestling. You have to book something, and your top guys have to lead the way, no matter how banged up or exhausted they may be.

5. I haven't watched WWE programming since WrestleMania. I usually don't tune back in until just before SummerSlam, and then I dip out again. The only reason I do this is because at some point it feels necessary to begin and end a story. I'm trained to expect that from television and film and sports, after all. Plenty of fans are weekly devotees but the majority of casual viewers fade in and out in the months leading up to and away from WrestleMania. The concept of breaking pro wrestling up into seasons isn't all that foreign (just look at indie promotion CHIKARA, or to a lesser extent, the bulk tapings for NXT) and in the case of WWE, it's possible to create distinct brands with separate casts that can work 12 weeks at a time, building towards a pay-per-view event.

6. The WWE doesn't believe wrestler safety is at risk from running year-round. They'll tell you that injuries happen regardless of a wrestler's schedule, which for decades has long been the kind of false equivalencies the industry has justified their practices with. Without having created a scientific measurement to defend this, I can tell you that I fully believe one week in the life of a top WWE star -- wrestling for multiple TV programs plus live house show events in addition to unending travel -- has the same physical toll as that of playing running back in the NFL in 2014 for 20 carries a game in a full season. The difference is that one schedule goes for 18 weeks and one for 52.

More from the WWE

WWE (and its fans) are quick to mention that most talent won't work for 52 full weeks each year. What they're denying is one of the two reasons why: Aside from creative not having material for a wrestler with "mid-card" or lower popularity, the only other reason a "name" talent is off the road is because of injury.

(Or they're the Undertaker, who stands as a bizarre strawman for both sides of the debate over wrestler safety: He works a very limited schedule at a very advanced age, yet has still finished WrestleMania runs with major injuries.) 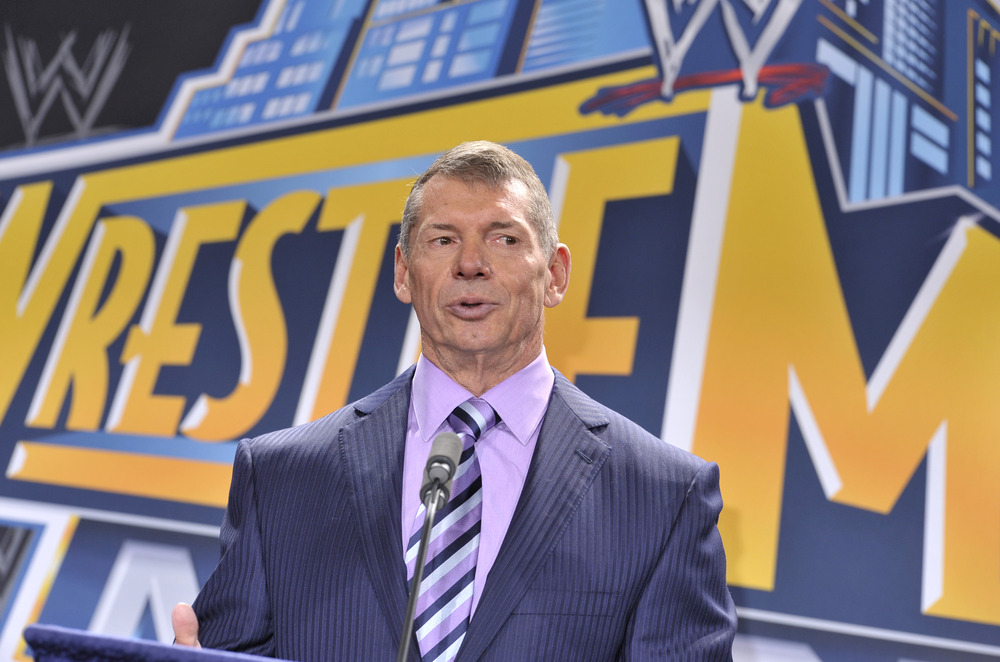 7. Wrestling is one of the most consistent performers on television in the entire world. When properly budgeted for TV production costs, pro wrestling can profit by delivering a consistent, flat viewership number to a cable network. In the ever-splintering world of TV viewership, even the promise of just under a million total viewers each week entices executives to sign multi-year deals. And from ROH to WWE, television deals are the lifeblood of a company. But network executives have never had to figure out how to cajole 100 episodes of "Big Bang Theory" a year. Wrestling is alone in that respect. That model -- mass quantities of cheaply produced original content that ducked show business guilds and unions -- is largely why reality TV dominates schedules and ratings today.

8. So, back to the vomiting. Our TV show's narrative integrity wasn't at the forefront of my mind as I tried to keep a man covered in a juice of Smoothie King and Skoal conscious, but the man himself was. We cleaned him up, he aced the live TV spot, got on a plane and shot 2 hours of television that night, the night after his concussion PPV match. The day after that, we sent him across the country to promote an on-sale event for an upcoming show before wrestled three more dates to end the week.

He is still wrestling today. When he isn't wrestling on TV every week, it's because he's injured. The last time I spoke to him, he had no memory of the match he suffered the concussion in or the day I spent with him after. I fully expect him to die within the next five to ten years. Until then, you can see him every single week on cable TV.